Words of foreign origin in the standard language and Anatolian dialects are important documents of Turkish history and culture. These interlingual borrowings; as well as being a common subject of history, literature, art history, linguistics, they are important sources for many more interdisciplinary studies. With this study, it is aimed to determine the Armenian words that the Armenians living in Sivas, one of the ancient cities of Anatolia, brought to the Sivas dialect and the standard language, and to reveal in which ways and to what extent these words affect the language and culture. Examining 93 words of Armenian origin living in the Sivas dialect will contribute to the studies of revealing the cultural exchange of people who have lived in the same geography for centuries. Words related to agriculture such as çav, calaz, herk, maşala, tığ; The fact that building and architectural terms such as hezan, him, loğ, mertek, pağ were taken from Armenian should be accepted as clear indications that the Turks received some knowledge in these areas from Armenians in Anatolia. The fact that these words belong to the fields of agriculture, animal husbandry, architecture and daily life is important in terms of art history, cultural history and sociology studies. 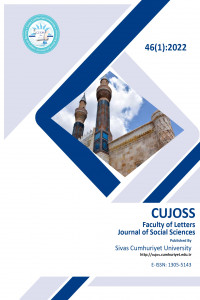